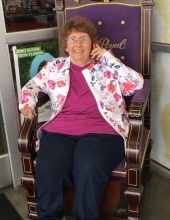 Sarah “Jane or Janie” Morrison was born September 16, 1941 in Seneca, Kansas daughter of George and Kathryn (Butler) Lueb. She passed away peacefully October 9, 2021 at Cass Regional Medical Center Harrisonville, Missouri surrounded by her children and grandchildren.

Jane grew up in Seneca, and graduated from Sts. Peter and Paul Catholic School. After graduation she moved to Kansas City to attend nursing school, but ultimately went to work at Hallmark Cards. While living in Kansas City, she was arranged to meet the man who would eventually become her husband and the love of her life, Charles “Chuck” Morrison. They were married May 20, 1967 at Sts. Peter and Paul Catholic Church in Seneca. Together they built a home in Peculiar, Missouri and went on to raise four children and were members of St. Sabina Catholic Church, Belton and Our Lady of Lourdes Catholic Church, Harrisonville. They were happily married for 51 years until Chuck passed in 2018. Jane was a devoted mother and wife. She touched many lives and had countless friends through the years, thus making lifetime memories while working as a food service manager at Ray-Pec High School. She loved her children and grandchildren, her husband and her faith. She loved camping and fishing, sewing and mending, crocheting, playing cards and board games with the grandkids, listening to Alan Jackson and watching the Kansas City Royals.

Funeral mass will be 11:00 a.m., Thursday, October 14, 2021 at Our Lady of Lourdes Catholic Church, Harrisonville, Missouri with burial in the Peculiar Cemetery, Peculiar, Missouri.

A celebration of life will be held immediately after the graveside prayer and blessing at Peculiar Winery.

Family suggests memorial contributions may be made to Our Lady of Lourdes Catholic Church Memorial Fund and may be left at Dickey Funeral Home, Harrisonville, Missouri.
To order memorial trees or send flowers to the family in memory of Sarah Jane Morrison, please visit our flower store.