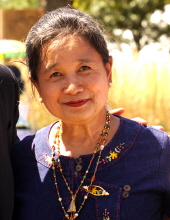 Varalucksana Suchato Slaughter, also known as Oay to many, passed away at the age of 67 from cancer-related complications on the evening of July 22, 2021 at Research Medical Center. In the Kansas City area, she’s been known as a wife, mother, friend, artist, singer, dancer, teacher, advocate, and all-around pillar of the Thai community.

Oay was born in Bangkok, Thailand and graduated from Silpakorn University with a Bachelor of Fine Arts degree in graphic design. After school, she was employed by the Thai Ministry of Industry and worked to help uplift rural and tribal communities through their crafts.

In 1984, she came to the US to study fibers and graphic design at the Kansas City Art Institute. In Kansas City, Oay met her soon-to-be-husband; they married in 1987 and had a son, Stephen, in 1988. Together they lived in Kansas City, KS, during which time Oay helped to bring a sense of home to many Thai college students studying in the KC area.

From 1993 to 1996, the Slaughters resided in Jakarta, Indonesia. During that time, Oay volunteered with the National Museum of Indonesia. The proximity to Thailand allowed her to easily maintain and reforge connections with her family.

Upon their return to the US in 1996, the Slaughters settled in Harrisonville, Missouri, where they had lived to the present day. There, Oay used her knowledge and passion to help people of all ages and capabilities.

At the turn of the millennium, Oay intensified her involvement with the area Thai community, and she created the Thai Cultural Center of Greater Kansas City. She also got involved with Kansas City’s Ethnic Enrichment Commission and was appointed commissioner of Thailand. Through her positions, she brought the community together and served as a forging force by being, among many other things, an interpreter, health care facilitator, immigration negotiator, bridge between small businesses, envoy to a multitude of both local governments and NGOs, and cultural ambassador to the greater community.

There are so much more things that Oay had done, and positive impacts made on every life she touched, that this obit merely scratches the surface.

Her physical presence is gone and leaves a sense of absence in those who love her, but her enduring spirit and will lives on. May her memory be a blessing to all.

Donations can be made to Sarah Cannon Center https://sarahcannon.com/about/sarah-cannon-fund.dot
To order memorial trees or send flowers to the family in memory of Varalucksana "Oay" Slaughter, please visit our flower store.