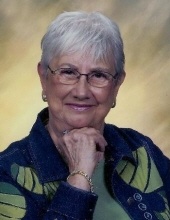 Vivian L. “Bonnie” Burwell, 91, of Lee’s Summit, was born, May 15, 1928, in Clinton, Missouri, the daughter of George and Ethel (Pruessner) Eberting. She departed this life Monday, November 25, 2019, at the John Knox Village Care Hospice House surrounded with love and family.

She was the third of four children, and they lived in the country area called Deer Creek outside Clinton, Missouri. Her parents farmed during the Great Depression. Her mother died at an early age, leaving her older sister, Marcella, to care for her siblings. Bonnie enjoyed sharing stories that included being tied to a tree so her sister, Marcella, could get the chores done. Hard times forced the family to Kansas City, where her father, George, worked at Sheffield Steel. Bonnie graduated from Central High School in 1946.

After high school, while working and living with her siblings in Kansas City, Kansas, she met a handsome, young sailor, Gene. On December 21, 1946, she was united in marriage to Eugene Grady Burwell in Kansas City, Missouri. He preceded her in death on October 18, 2001.

As a young woman and while raising two young, rambunctious boys, Bonnie worked at the Colonial Poultry Farms. During the summer, she enjoyed taking her boys to the Pleasant Hill Country Club and teaching her boys how to swim and fish. Later, she was employed as a claims processor for the Internal Revenue Service, retiring in 1985. She was an active member of the Pleasant Hill United Methodist Church. She loved playing Bridge with her friends at the Pleasant Hill Bridge Club and passed her love of playing cards to her grandchildren and great grandchildren. She enjoyed dining and dressing up with the Pleasant Hill Red Hatters. She was proud of her committee work, especially the scholarship fund offered by the V.F.W. Post #3118 Women’s Auxiliary. Bonnie was an avid gardener, tending to a thriving vegetable garden year after year and keeping the home accented in vibrant flowers, particularly roses. Gene and she were often sighted golfing, fishing for crappie, and morel mushroom hunting. Bonnie was an outstanding cook and was famous for her homemade cinnamon rolls. She and Gene loved to travel with friends in Europe and the Caribbean. More than anything, she especially enjoyed spending time with her grandchildren.

The family requests memorial contributions to John Knox Village Hospice, 400 NW Murray Road, Lee’s Summit, MO, 64081 or may be left in care of the funeral home.