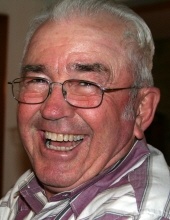 William “Bill” Joseph Elliott, of Belton, Missouri was born April 12, 1939 in Independence, Missouri the son of Joseph and Lorene (Ingrum) Elliott. He departed this life on Monday, April 26, 2021 at his home surrounded by love and family at the age of 82 years and 14 days.

Bill was employed as a clerk for the US Post Office in Kansas City, Missouri until his retirement in December of 1999. He spent many years coaching baseball in the SSJBA. Bill loved woodworking, fishing, gardening and was an avid John Deere enthusiast.

Besides his parents, he was preceded in death by his first wife, Marilyn Elliott on February 29, 2000; a brother, Henry Elliott and a sister, Helen Worthley.

Family suggests memorial contributions may be made to the MS Society or the Johnson County Mental Health, 1125 W. 1st Street, Olathe, Kansas 66061.

Funeral arrangements are under the direction of the Dickey Funeral Home, Harrisonville, Missouri.
To order memorial trees or send flowers to the family in memory of William "Bill" J. Elliott, please visit our flower store.