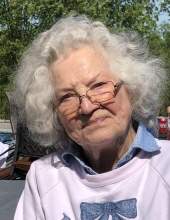 Agnes Lucille (Sloan) Cantrell of Harrisonville, Missouri, formerly of Thayer, Missouri was born March 20, 1933 in Koshkonong, Missouri the daughter of Lester Eugene and Alta Ozetta (Whiteside) Sloan. When Agnes was 2, her father passed away and she was raised by her step-father, James Tobias Phipps. She departed this life on Sunday, July 28, 2019 at her home surrounded by love and family at the age of 86 years, 4 months and 8 days.

Agnes moved to Harrisonville in 2010 after living 19 years in Thayer, Missouri caring for her mother and step dad after she retired from the Goodyear Tire Company. Agnes enjoyed gardening, yard work, cooking, quilting, watching TV and spending time with family and friends.

Besides her parents and step-father, she was preceded in death by her granddaughter, Jessica A. Cantrell; her step-sister, Mildred Madden; step-brother, Burel Phipps and brother-in-law, Norman Vaughn.

Cremation. A private family inurnment will be held at the Walker Cemetery, Thayer, Missouri at a later date.

Funeral arrangements are under the direction of the Dickey Funeral Home, Harrisonville, Missouri.
To order memorial trees or send flowers to the family in memory of Agnes Lucille Cantrell, please visit our flower store.