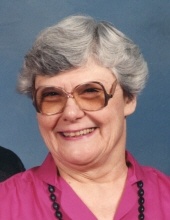 Anna Belle (Ferguson) Griner was born May 4, 1928 near Adrian, Missouri, the youngest of eight children to Alfred Albert and Gertrude Mae (Cox) Ferguson. She departed this life on Tuesday, May 11 at the age of 93 years and seven days, in the presence of her children and their spouses.

On April 7, 1951, Ann was united in marriage to William G. “Bill” Griner in Bentonville, Arkansas. The couple moved to Belton in 1957.

Ann grew up on her family’s farm near Adrian. Her early education was in a one-room school, and she graduated from Adrian High School. Throughout her life she had a love for poetry, humor, family and her church. Her primary career was as a loving mother and homemaker. She also worked various jobs outside the home, most recently as a cashier/hostess at the Richards-Gebaur Officers’ Club and Snead’s BBQ. She will be remembered for her kind gentle spirit.

Besides her parents, she was preceded in death by her husband, Bill; an infant son, Kenneth; a son-in law Gary Martin; and her seven brothers and sisters.

Family suggests memorial contributions may be made to the Belton Christian Church Memorial Fund.

Funeral arrangements are under the direction of the Dickey Funeral Home, Harrisonville, Missouri.
To order memorial trees or send flowers to the family in memory of Ann Griner, please visit our flower store.