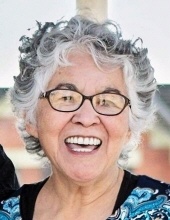 Ana was a 1963 graduate of the Escuela de Comercio High School in Guatemala.

On August 12, 1972, she was united in marriage to Rafael Cortinas at the San Gabriel Catholic Church in San Gabriel, California.

Ana had worked for Orchid Paper Products in L.A. County and later for General Motors in Anaheim. She enjoyed sewing and knitting. She also enjoyed watching Spanish soap operas. She was a member of the St. Bridget Catholic Church in Pleasant Hill.

Ana was preceded in death by her parents; one sister, Lily Ramirez; and her son Fernando Cortinas just 9 months earlier on May 2, 2018.

She is survived by her husband Rafael, her daughter-in-law, Amie Cortinas, and two grandchildren, Harrison Cortinas and Katie Cortinas, all of Pleasant Hill; one brother, Jose Francisco Cardona of Guatemala; Bertha LaVerreda of Ft. Worth, Texas, Martha Cardona, and Marichu Soberanis, both of Fullerton, California; other relatives and friends.

Online condolences may be sent to the family at www.stanleydickeyfunerlhome.com