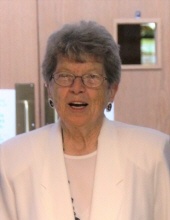 Anna Louise Cryderman of Harrisonville, Missouri was born January 1, 1930 in Springfield, Missouri the daughter of Jesse Eugene and Laura (Green) Weatherwax. She departed this life on Thursday, March 5, 2020 at Meadow View of Harrisonville at the age of 90 years, 2 months and 4 days.

On November 3, 1947, Anna was united in marriage to Jefferson W. “JW” Cryderman in Harrison, Arkansas.

Anna was employed as a secretary for the Boys Scouts of America in Auburn, California. She was a member of the Pleasant Hill Church of Christ, attended Jackson Street Church of Christ in Willard, Missouri and was very active in the Cass Regional Medical Center Women’s Auxiliary, Harrisonville. She loved to sew, work in her flower garden, go for walks and her dog.

Besides her parents, she was preceded in death by her husband JW Cryderman on September 4, 2015; a son, Ron Cryderman and two infant twin girls.

Family suggests memorial contributions may be made to the Fairhaven Children's Home, Strafford, Missouri.
To order memorial trees or send flowers to the family in memory of Anna Louise Cryderman, please visit our flower store.