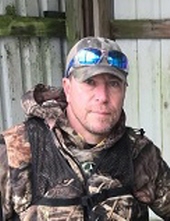 To our family, friends, and neighbors:

Tony Yates passed away Monday, January 21, 2019 surrounded by those that love him. He is proceeded in death by his father, George “Gooch” Goodman. Tony is survived by his wife Angela, their three daughters, Cheyenne, Gracie, and Josie of the home and son Jordan Crofut currently in the Navy. He’s also survived by his parents, Greg and Mary Yates, his sister Rhonda Pycior, his brother G. Jason Goodman and his nieces and nephew.

The list of things to describe how exceptional he was, is long:

He spent many years in service to others. He was in the U.S. Army, he worked as a Police Officer in Raymore, he worked as a military contractor and spent several years in Afghanistan combating terrorism.

He loved his family especially his wife, Angela and their babies Cheyene, Gracie, and Josie.

He loved his friends and was generous to a fault. EVERYONE believed Tony was actually THEIR best friend.

He loved coaching his girls’ softball team. Who else would coach a girls’ team named, “Mercenaries?”

He frequently gave his things away to friends, because he thought they would enjoy them. No one around him was going to be in need or without a place to stay.

He could give you detailed directions to somewhere and in a million years, you would never find where he was talking about.

He was a warrior, but definitely not a poet.

He was an insufferable dork. He would sit with his girls and watch a movie and then chew his food as loud as possible and stare at you until you acknowledged him. He would not let you ignore him.

He would not allow you to make excuses. “No sissies are allowed here… Nope, don’t want to hear it!”

He relentlessly pursued his passions and stood in defense of those he loved. He loved many.

A Viking proverb says, “A leader should be silent, thoughtful, and bold in battle. Every man should be both Cheerful and Generous until his death finds him.” Tony was all those things. He was loved. He was taken from us too soon. We love you, Tony beyond time and measure.

A celebration of his life will be held on Saturday, February 2nd, 2019 from 4 p.m. to 8 p.m. at the Beck Event Space in Harrisonville MO. There will be drinks and laughter and a profound celebration of all the fun and loving things he was. It will be more of a celebrity roast than a mourning.

The family suggest in lieu of flowers a contribution can be made to one of the following charities in Tony’s name...