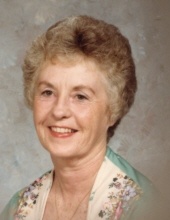 Arlene Maurice King of Garden City, Missouri was born November 5, 1928 in Drexel, Missouri the daughter of Otto Maurice and Eula Arlene (Hixson) Coleman. She departed this world on September 11, 2018 at the Benton House of Independence surrounded by love and family at the age of 89 years, 10 months and 6 days.

At the age of 22, Arlene was united in marriage to Sammy Joe King on December 27, 1950 in Garden City, Missouri. She was the mother of Lucinda and Kevin King.

Arlene was a graduate of Southwest Baptist College. Her first job at 19, was a teacher of a one room school with students from first through eighth, only two students graduated that year. She then taught at East Lynne Elementary, from 1950-1960. Taking her teaching career to Garden City Elementary she stayed there till the school combined with the other surrounding rural towns making the school, Sherwood, in 1980. She taught at Sherwood for her remaining years as a teacher until 1989. Retiring after over thirty-nine and a half years of teaching, that didn’t slow her down. She began to learn to paint after retiring, it becoming a passion of hers for years to come, just as she enjoyed to keep playing the piano for her church, and living her life to the fullest.

Besides her parents, she was preceded in death by her husband, Sam King on July 25, 2013.

Arlene was passionate about teaching and truly loved being a resident of Garden City. She talked about how teaching her students had given her such joy and she was glad she could make an impact in their lives. She will be greatly missed.

Funeral services were held Monday, September 17, 2018 at the Heart of Life Church, Garden City, Missouri with burial in the Garden City Cemetery.

Family suggests memorial contributions may be made to the Kindred Hospice.

Funeral arrangements are under the direction of the Dickey Funeral Home, Garden City, Missouri.
To order memorial trees or send flowers to the family in memory of Arlene M. King, please visit our flower store.