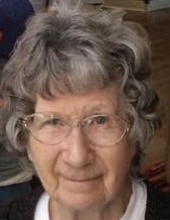 Bertha (Bert) Isabelle Wylde, of Harrisonville, MO, was born June 2, 1929, in Atchison, Kansas. She was one of two daughters to Benoni and Minnie (Kelsay) VanValkenburgh. She passed away peacefully on Sunday, December 22, 2019, at Golden Years Center in Harrisonville, Missouri, at the age of 90 years, six months, and nine days.

Bertha, who went by “Bert” to friends, and “Meme” to her grandchildren, was a graduate of Atchison High School and proudly called Kansas her first love.

She was united in marriage to Calvin Eugene Wylde on June 2, 1957, at the First Baptist Church of Atchison, Kansas. He preceded her in death on December 12, 2013.

Bert was foremost a homemaker who welcomed family and friends into her home and insisted that their comfort was her priority. Being a pastor’s wife, she served along Calvin at various churches in Buckner, Jamesport, Stewartsville, Kansas City, and East Lynne, Missouri, She was a member of the East Lynne Baptist Church, and then attended the Heart of Life Church, in Garden City, Missouri. Her unwavering faith and dedication to her family and friends will continue to leave a lasting impression on her family and friends that crossed her path.

Bert worked at the Cass County Assessor’s Office for over 20 years and after her retirement, she and Calvin spent time planting flowers, hosting family and friends, and playing with their grandchildren. Calvin made sure that she always had her favorite hummingbird feeder ready for spring and made sure red cardinals would visit outside her window each winter.

Besides her parents and husband, she was preceded in death by a son, Paul D. Wylde, Seattle, Washington, and a sister, Esther Scott, Atchison, Kansas.

Bert is survived by a son, Lester E. Wylde and wife Cheryl, Harrisonville, Missouri and a daughter, Mary Graf and husband, Dennis, Raymore, Missouri. She was Meme to 8 grandchildren and 12 great grandchildren.

Family suggests memorial contributions be made to the City Union Mission, in honor of the years that she and Calvin volunteered and served this ministry.
To order memorial trees or send flowers to the family in memory of Bertha "Bert" I. Wylde, please visit our flower store.