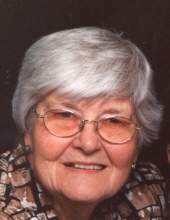 Bettie Jean Pollard of Harrisonville, Missouri was born May 3, 1931 in Vona, Colorado the daughter of Abraham and Florence (Worthington) Fast. She departed this life on Sunday, August 26, 2018 at Golden Years Care Services, Harrisonville at the age of 87 years, 3 months and 23 days.

Bettie was employed in the housekeeping department at Cass Medical Center, Harrisonville for 13 years until her retirement in 1997. She was a member of the Sycamore Grove Mennonite Church near Garden City, Missouri. Bettie had lived in Harrisonville and Garden City before moving back to Harrisonville in 2016.

Besides her parents she was preceded in death by her first husband, Eugene Beason on October 13, 1984; her second husband, Richard Pollard on August 6, 2015; a granddaughter, Emily Brunner Taylor and a sister, Mable Beason.

Bettie is survived by her daughter, Alice Brunner and husband Bob, Harrisonville, Missouri; a grandson, Scott Brunner and three great-grandchildren, Alexis, Kristopher and Hailey; a sister, Marjorie Biglow, State of Florida; other relatives and friends.

Cremation. A Celebration of Life Service was held Friday, August 31, 2018 at the Dickey Funeral Home, Harrisonville, Missouri.
To order memorial trees or send flowers to the family in memory of Bettie Jean Pollard, please visit our flower store.