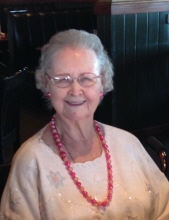 Betty Ann Holt, of Harrisonville, Missouri was born January 24, 1930 in Oklahoma City, Oklahoma the daughter of Carson and Ella (Houck) Ramsey. She departed this life on Thursday, August 15, 2019 at Menorah Medical Center, Overland Park, Kansas at the age of 89 years, 6 months and 22 days.

On November 28, 1946, Betty was united in marriage to Jack Twyman Holt in West Plains, Missouri.

Betty owned and operated a daycare in Aulander, North Carolina. She was a member of the Coleman Baptist Church, Peculiar, Missouri. Betty always “Dressed to the Nines”. She was a sweet lady and never had a bad word for anybody.

Besides her parents, she was preceded in death by Jack T. Holt on April 4, 1987; two sisters, Edith and Lorene and two brothers, Carl and Clyde.

Funeral services were held Sunday, August 25, 2019 at the Dickey Funeral Home, Harrisonville, Missouri with cremation to follow the service.

Family suggests memorial contributions may be made to the Coleman Baptist Church Memorial Fund.
To order memorial trees or send flowers to the family in memory of Betty Ann Holt, please visit our flower store.