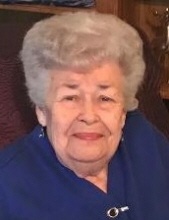 Betty Jane Cooper, 90, of Lee’s Summit was born, March 29, 1931, in Lawson, Missouri, the daughter of Walter B. and Nellie (Johnson) Mattox. She departed this life, Saturday, April 24, 2021, at her home surrounded with love and family.

Betty had been employed as a Grocery Clerk for the Lucky’s Grocers in California and the Hy-Klas Grocery Store in Belton. She was a member of the Lone Jack Christian Church. She had also been a member of the Lone Jack Civic Club and the Red Hatters. She enjoyed working around her home and garden, traveling, and was an avid reader. She especially enjoyed time with family.

Besides her husband she was preceded in death by her parents.

Visitation will be held 1:00 p.m. until service time.

Memorial contributions are suggested to Kindred Hospice and may be sent in care of the funeral home.