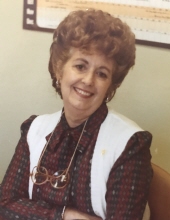 Betty was born to Cecil and Agnes Poulin Hancock in Battle Creek, Michigan on December 19, 1926. Betty married Robert E. Hudson in Harrison, Arkansas on November 16, 1947. They
moved to Kansas City, Missouri shortly after. Betty stayed home with all three children but later enjoyed working with Market Research in the greater Kansas City area. She also was a
secretary at Kansas City Life Insurance for many years. She and Robert enjoyed social
activities at the Ararat Shrine Temple which included many trips. Betty spent many hours
sewing blankets for the Shrine Hospital in St. Louis. Her love was decorating, playing cards
and frequenting garage sales.

Betty was preceded in death by her husband, mother, father and sister Mildred.

She is survived by her three children, Diana, husband Ken of Archie, MO, Robert II and wife Linda of Carrollton, TX, and son Rick and wife Beth of Lake of the Ozarks, MO. Betty had nine
grandchildren, Aaron, Adam, Addison, Sterling, Bryn, Nick, Sara, Dash, and Hank. She is
survived by ten great-grandchildren.

Funeral arrangements are under the direction of the Dickey Funeral Home, Harrisonville, Missouri.
To order memorial trees or send flowers to the family in memory of Betty Jean Hudson, please visit our flower store.