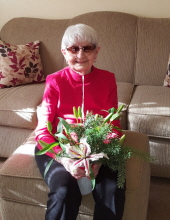 On June 16, 1929, a late spring, God delivered a gift to the family of Dwight and Bertha Norman on their farm in America's heartland. Betty Jean Norman had entered the world as the baby sister of Vernon, Virginia and Dwight Jr. She departed this life on Sunday, March 18, 2018 at her home surrounded by love and family at the age of 88 years, 9 months and 2 days.

On June 5, 1948, Betty was united in marriage to Morris Kropf. In 1956, they packed up their belongings and two small daughters, Cindy and Cathy and headed to California. They settled in La Mesa, California and 4 years later, their third daughter, Carol, was born. In 1968, Betty and Morris divorced but remained friends throughout life. In 1970, Betty married Leonard Trout but later divorced.

Betty was a Federal Civil Service employee. She worked at the US Post Office, La Mesa, California, Balboa Navel Hospital, San Diego and at the VA Hospital in La Jolla, California where she retired in 1975. In 1986, Betty moved back to Missouri to spend time and take care of her sister, Virginia who had taken ill. In 1988, Betty moved back to Kansas City to be near family and worked for JC Penney's and then became the "Lunch Lady" for the Park Hill School District until she retired at the age of 75. Betty's favorite thing to do were to play with the grandkids and dance. She always told the family, "If I drop dead on the dance floor, don't be sad. Can't think of a better way to go!" All in all, Betty felt she had a good life and enjoyed every minute of it.

The family received friends Sunday, March 25, 2018 at the funeral home.

Family suggests memorial contributions may be made to Crossroads Hospice or Children's Mercy Hospital.
To order memorial trees or send flowers to the family in memory of Betty Jean Trout, please visit our flower store.