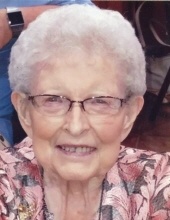 Beverly grew up in Creighton, Missouri. She and her sister, Betty, enjoyed living in town. Their activities involved church, music, family and friends. The girls, Beverly and Betty, shared a bedroom and were best friends. Beverly said that she had the first bicycle in town and that all the kids in town learned how to ride on her bike. Beverly attended school in Creighton and graduated from Creighton High School in 1946.

Beverly attended Central Missouri State College (now the University of Central Missouri), majoring in music education with a minor in business. While home from college one weekend to watch her sister play basketball, Beverly met a very good-looking guy from Ballard, MO named Gerald Walker. Beverly and Gerald quickly became college sweethearts and were married on August 14, 1949. Beverly graduated with her bachelor's degree in the summer of 1950.

Beverly started her teaching career at Green Ridge, Missouri. Over the next sixteen years, Beverly taught at Clearmont, Elwood, Rushville, North Platte and Wathena School districts. She taught music, business and even English at times. During those same years, Beverly and Gerald welcomed four daughters into their lives: Jane, Joellen, Jerri and Jennifer. In 1965, the Walker family returned to Beverly's hometown of Creighton, where Gerald became superintendent of Sherwood School District and Beverly taught music at Gerald's hometown of Ballard.

In 1968, Beverly decided to return to college to pursue a Master of Science in Speech and Language Pathology. She attended CMSC {now the University of Central Missouri) in Warrensburg, Missouri. The first summer of courses were all science prerequisites in order to be admitted to the graduate program. Both Jerri and Jennifer can remember going to sleep to the sound of a typewriter and waking up to that same sound. Beverly finished her teaching career by becoming the first speech and language pathologist for the Sherwood School District. She retired from full time teaching in 1988.

Beverly was a life-long member of the United Methodist Church where she was the pianist and active in the United Methodist Women's organization. Beverly was an avid sports fan enjoying the KC Chiefs, KC Royals, MU Tigers and college basketball. She enjoyed travel, sailing with Gerald on their boat, playing cards (especially Bridge), watching Hallmark movies because of their happy endings, and game shows to keep her wits sharp. But the most important thing in her life was her family. She loved spending time with her children, grandchildren, and great-grandchildren as well as the extended family of her sister and sister-in-law. Family gatherings were always busy, loud and fun.

In lieu of flowers, memorials contributions can be made be made to the Gerald and Beverly Walker Scholarship Fund. As life-long educators, there is no better way to honor Gerald and Beverly's memory than to support the scholarship established in 2001 for well-deserving students of Sherwood High School. Since its founding, the fund has granted over 35 scholarships.

Cremation. A Celebration of Life Service will be held at 2:00 p.m., Sunday, April 25, 2021 at the Creighton United Methodist Church, Creighton, Missouri with inurnment at the Grant Cemetery following the service.

Funeral arrangements are under the direction of the Dickey Funeral Home, Garden City, Missouri.
To order memorial trees or send flowers to the family in memory of Beverly A. Walker, please visit our flower store.