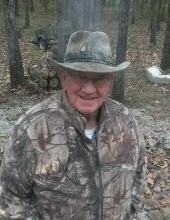 Billy Joe Houston, of Harrisonville, Missouri was born October 14, 1934 in Osceola, Missouri the son of Marshall Wilbur and Beaulah May (Sweeney) Houston. He departed this life on Sunday, August 19, 2018 surrounded by love and family at Crown Care Center, Harrisonville at the age of 83 years, 10 months and 5 days.

Billy was a truck driver for Safeway for 30 years before his retirement. He loved to hunt and fish and was the "King" of the Sac River in Osceola. Billy enjoyed his family and spending time with his grandchildren and great-grandchildren.

Cremation. Graveside service and inurnment will be held on Sunday, September 9, 2018 at 2:30 p.m. in the Humansville Cemetery, Humansville, Missouri.
To order memorial trees or send flowers to the family in memory of Billy Joe Houston, please visit our flower store.