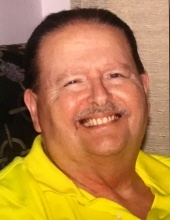 On June 1, 1998, he was united in marriage to Kathryn R. Woodrum-Garrison in Pleasant Hill.

Brian was employed as a journalist having several articles published in the Lee’s Summit Journal as well as the John Knox Village News. He was also employed as a Landscaper and was part of the crew that planted the many rose plants at Unity Village. He was a member of the Harrisonville United Methodist Church and a Life Member of the Veteran’s of Foreign Wars. He enjoyed writing poetry, gardening, golfing, bowling, and playing Wii.

Brian was preceded in death by his parents; one grandchild, Mariah; and one brother, William “Bill” Jerden.

He is survived by his wife Kathy of the home; one son, Brian W. Jerden, Jr. of Washington State; two daughters, April D. (and Chris) Stecher of Olathe, and Kristina Parker of Grain Valley; one stepson Phillip (and Brittany) Garrison of Harrisonville; one stepdaughter, Rachel Garrison of Lee’s Summit; 10 grandchildren, Graysen, Elias, Macy, Hayden, Madison, Djinn, Cameron, Colston, Cora, and Adelynn; 2 great grandchildren, Maddox and Skylar; one brother Darrell (and Pam) Jerden of Bloomington, Indiana; and sister-in-law, Dixie Beechner-Jerden of Reno, Nevada; other relatives and friends.

A memorial service will be held 6:30 p.m. Monday, September 24, 2018, at the Pleasant Hill 1st Presbyterian Church. Reverend Mary Rose Shonkwiler will officiate. Full military honors will be conducted by the U.S. Navy and the V.F.W. Post #3118 Honor Guard.

Visitation will be held 5:30 p.m. until service time at the church.

Memorial contributions are suggested to the V.F.W. Post #3118 Veteran’s Relief Fund and may be sent in care of the funeral home.

Final arrangements are under the care of Stanley-Dickey Funeral Home, Pleasant Hill, Missouri.
To order memorial trees or send flowers to the family in memory of Brian Ward Jerden, Sr., please visit our flower store.