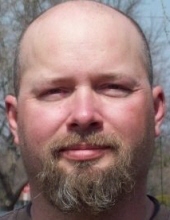 John Brian Yaple was born in a hospital hallway on November 27, 1971, in Anderson, Indiana, to Gail and Ralph Yaple. Establishing his history of impatience and habit of arriving early.

Brian attended grade school and junior high in Lee’s Summit, Missouri. He attended both Lee’s Summit High School and Harrisonville High School, graduating in 1990. He received an Associate’s Degree from Crowder College in Neosho, Missouri at his mother’s insistence, but found little about higher education to recommend.

A man of few words, Brian reliedon his actions speaking for him. He was skilled in carpentry, machinery, horse showing, bull riding, tree climbing, brother fighting, trampoline flips, and happily living out of a semi, racking up thousands of miles when lesser men would have been driven insane by solitude and close quarters.

Brian worked for TMK Trucking for 10 years, until a necessary heart surgery ended his life on the road. After recovering from his illness, he began a new career at Whitaker Aggregates in Ottawa Kansas that he loved. He was initially distressed by the loss of his open road lifestyle, but learned that without constant motion he had more time and proximity to spend with his four grandbabies, whom he adored.

He is survived by his only child, Brittany Eaton of Higginsville, MO; his mother, Gail of Harrisonville, MO; his father and step-mother, Ralph and Charlene of Lenexa, KS; and grandchildren, Wyatt, Lucas, Jasper and Olivia. He is also survived by his siblings: Jill Finn (and husband Sean) of Lawrence, KS; Paul Yaple (and wife Robin) of Lone Tree, CO; Matt Yaple of MO; and their children: Hope, Hannah, Lauren, AJ, and Allison.

Among Brian’s talents was the ability to quote “Darby O’Gill and The Little People” in its entirety.We know that when the CoisteBodhar came for him, Brian quoted Darby.

We wish we could go with you all the way, Brian.

A Celebration of Life Visitation was held Saturday, May 18, 2019 at the Dickey Funeral Home, Harrisonville, Missouri.

The family suggest in lieu of flowers that memorial contributions may be made to American Diabetes Association or United States War Dogs Association.
To order memorial trees or send flowers to the family in memory of Brian Yaple, please visit our flower store.