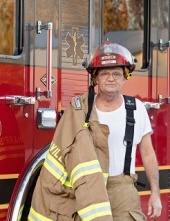 Johnny Dale Coday, firefighter/EMT, friend, husband and father was born in Kansas City, Missouri on November 27, 1968. He lost his battle with cancer on January 12, 2021 at home in Harrisonville, Missouri.

He graduated from Lee’s Summit High School in 1987. After high school he met Jennifer Stanley at the Raymore Fraternal Order of the Eagles and they were married June 22, 1991.

He would not apologize for loyalties to the Royals, Chiefs and Democratic Party even when all three occasionally let him down. He lived to see the first Royals World Series Championship in 30 years, the first Chiefs Super Bowl win in 50 years.

Johnny was a Fourth Degree Knights of Columbus and member of their honor guard.

He loved time at Lake Pomme de Terre, fishing (although Jennifer says he was never as good at fishing as her) Las Vegas and deer hunting.

Colleagues say he leaves a lasting legacy on the Harrisonville Fire Department. He was the consummate professional firefighter and inspiration and role model.

A scholarship in Captain Johnny D. Coday’s name is being established for students planning a career in firefighting.

The family received friends Monday, January 18, 2021 at the Our Lady of Lourdes Catholic Church, Harrisonville, Missouri. Rosary services were held at 6:00 p.m.

The Funeral Mass was be held Tuesday, January 19, 2021 at the Our Lady of Lourdes Catholic Church, Harrisonville, Missouri.

The family suggest that memorial contributions may be made to Capt. Johnny D. Coday Scholarship Fund and may be sent in care of the Dickey Funeral Home, P.O. Box 432 Harrisonville, Missouri 64701.

Due to COVID-19 mask and social distancing is required while attending services.

The services were live streamed on Our Lady of Lourdes FaceBook page.
To order memorial trees or send flowers to the family in memory of Capt. Johnny D. Coday, please visit our flower store.