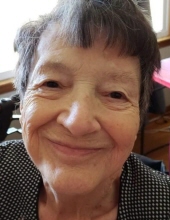 Carol Ann Cassity, 76, of Pleasant Hill, formerly of Knob Noster, was born October 17, 1941, in Los Angeles, California, the daughter of Harry and Opal (O’Neal) Heerman. She departed this life, Tuesday, September 11, 2018, at her son’s home in Pleasant Hill.

Carol was also preceded in death by her parents, and one brother, Bill O’Neal.

Carol worked at the Dining Facility at Whiteman AFB for several years and was an active volunteer with the Thrift Shop at Whiteman. Carol loved playing Bingo and going to the casino. The greatest joy Carol had was her grandchildren. She was there when they came into this world and there for everything afterwards whether it be birthday, football, softball, wrestling, a recital or making a special delivery of donuts hundreds of miles away.

Memorial contributions are suggested to the V.F.W. Post #3118 Veterans Relief Fund and may be sent in care of the funeral home.