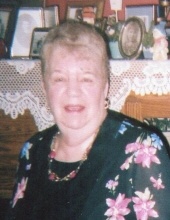 Carol Ann "Sugar" Seleman of Creighton, Missouri was born August 20, 1942 in Kansas City, Missouri the daughter of Donald Thomas and Virginia (Wineburg) Jackson. She departed this life on Wednesday, May 27, 2020 at her home surrounded by love and family at the age of 77 years, 9 months and 7 days.

On May 14, 1960, Carol was united in marriage to Terry Paul Seleman in Independence, Missouri.

Carol was a homemaker and later worked at Pro Air with Coburn McCulloh until her retirement in 2004. She was a member of the Holy Trinity Catholic Church, Urich, Missouri. Carol was the water aerobics instructor in Garden City, Missouri, an avid reader and a Swedish weaver. She and Terry moved to the farm in 1971. Carol was a special grandma and great-grandma and will be missed by all.

Besides her parents, she was preceded in death by her brother, Ret. US Marine Gunnery Sgt. Albert Jackson.

The family suggest that memorial contributions may be made to Catholic Charities and may be sent in care of Dickey Funeral Home, P.O. Box 432 Harrisonville, Missouri 64701.
To order memorial trees or send flowers to the family in memory of Carol Ann "Sugar" Seleman, please visit our flower store.