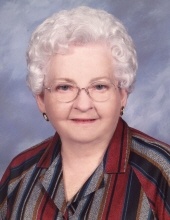 Carol Natalie Barnard, of Archie, Missouri was born April 23, 1924 near Garden City, Missouri the daughter of Paul Andrew and Florence Alberta (Coe) Hayden. She departed this life on Wednesday, June 17, 2020 at the Cass Regional Medical Center, Harrisonville, Missouri at the age of 96 years, 1 month and 25 days.

Carol attended Farmers View Elementary School and graduated in 1937 and was a 1941 graduate of Garden City High School.

Carol was united in marriage to Robert L. “Bob” Mansfield in May of 1942. To this union a daughter, Barbara Jean, was born in July of 1943. Bob died in an accident at the Olathe Naval Air Station on August 11, 1943. Carol and Barbara lived with her parents until she was united in marriage to James “Jim” Barnard in 1946. They lived on the farm where he grew up for 30 years then moved to a house across the road and lived there for 39 years. Carol was a lifelong member of the First Baptist Church, Archie, Missouri.

Besides her parents, she was preceded in death by her first husband, Robert L. Mansfield; her second husband, Jim Barnard on March 29, 2006; a grandson, Eric Barnard; a great-granddaughter, Tianna Britt and a sister, Francis Orthel.


A private family graveside service will be held at the Crescent Hill Cemetery near Adrian, Missouri.

Family suggests memorial contributions may be made to the First Baptist Church Memorial Fund, Archie, Missouri.

Funeral arrangements are under the direction of the Dickey Funeral Home, Harrisonville, Missouri.
To order memorial trees or send flowers to the family in memory of Carol N. Barnard, please visit our flower store.