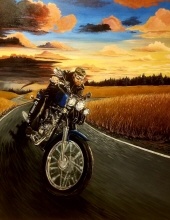 Charles Allen DeWitt, born in Independence, Missouri, on August 16, 1984 to Gary & Renee DeWitt, their oldest son. Charles Allen AKA Chuck Piston (don’t ask), this was his Facebook profile. He was such a private person for the most part unless he chose to welcome you into his world.

They knew by the 3rd grade that they had a very gifted son, IQ 132; yes, in the third grade. This was the first indication to his mischievous behavior. He was bored. Picking on his younger brother Jacob, was his newfound enjoyment. As Jacob says, “Charles was not a MILD, he was a HABANERO.”

To keep himself challenged he went to two-wheel bikes, BMX bikes. At 13 years his very athletic legs took him to Fast and Furious. First and last race brought home the State Championship plaque. He was offered sponsorship and tours, but they were turned down because he just wanted to have fun. Then came the challenge of “Four” wheels. Hot Rods to be exact. He wound up at KCIR for the “Bracket Racer” getting that record for himself and Hot Rod at 12.0 seconds. Now this Hot Rod was built with his earnings from serving his country. Dad was at home building his fire engine red 1980 Pontiac 400 Trans AM. He could not wait to get back to the USA to get behind the wheel.

After graduating from Sherwood High School, class of 2002, off to the Army he went. Specialist Charles A. DeWitt, Able Company, 2nd Battalion (Airborne) 503rd Infantry, 173rd Airborne Brigade, Unit 31401, APO PE 09630. While serving his country Charles was stationed in Vicenza, Italy, where he learned about very fine wine. Germany and Iraq were also on the list. Two years, four months, and twenty days of foreign services.

His decorations, medals, badges, and ribbons include:

He loved jumping from the Helio’s (IQ tested at what?). He also found a passion for his guns as noted in his pictures. The last gun he owned was his Grandpa Eldon’s gun, A Model 59 Smith & Wesson. He was extremely excited to receive Grandpa’s gun.

Another passion Charles found after returning home was IRON. He joined Local 10 Iron Workers Union. As any CRAFT, this meant he would need to compensate this income. This is when he turned back to the mechanical gift he was given, cars, trucks, Hot Rods or Harley’s. He was ready to get his hands greasy!Hard work was the top of the list, but he knew how to hunt – four legs, two legs, gills, or moral mushrooms, you do have to eat.

The “TWO” most important to Charles, God first, family second. Charles grew up with his Christian faith. And you know the harder you LOVE God, the more the devil wants you. He was no exception. He met his Uncle Loren Dewitt, on June 23, 2018 at Table Rock Lake to make the most important decision he would ever make. Baptism was his answer. Charles knew one day at a time was closer than we could realize. He was on a realm most of us will never experience.

Charles was Charles, he had an amazing spirit, love for those who understood him. He was the kind of man that would be there to help you “no matter” the situation. From two legs or four, his love was unconditional. He knew first-hand how wicked this life can be. His last words to many “you need to get yourself right with the Lord.” Charles knew he would be face-to-face with Jesus.

He was preceded in death by his maternal grandparents, Daniel and Bonnie Loeding and his paternal grandfather, Eldon DeWitt.

In lieu of flowers the family would greatly appreciate any amount of a monetary gift to the Charles DeWitt Memorial Fund:

Cremation. A Celebration of Life Service will be 2:00 p.m., Saturday, April 3, 2021 at the South Crysler Restoration Branch, 16101 Salisbury Road, Independence, Missouri 64050 with Military Honors to follow the service.

Inurnment at the Missouri Veterans Cemetery will be held on Wednesday, April 7, 2021.

Funeral arrangements are under the direction of the Dickey Funeral Home, Harrisonville, Missouri.
To order memorial trees or send flowers to the family in memory of Charles Allen DeWitt, please visit our flower store.