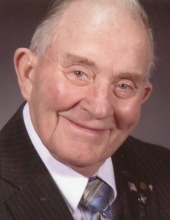 Charles "Chuck" Francis Morris Jr. of Peculiar, Missouri was born January 23, 1934 in Kansas City, Missouri the son of Charles Francis Sr. and Louise (Fowler) Morrison. He departed this life on Monday, December 3, 2018 at the St. Joseph Medical Center, Kansas City, Missouri at the age of 84 years, 10 months and 10 days.

Chuck was employed as an electrician at the GM Leed's Plant until his retirement. He was a member of Our Lady of Lourdes Catholic Church, Harrisonville, Missouri and very devoted to The Sacred Heart of Jesus, Knights of Columbus, the IBEW Union Local #124 and the UAW Union Local #93. Chuck was an Army veteran of the Korean War. He loved spending time with his family and talking about old cars.

Besides his parents, he was preceded in death by a sister, Gertrude Morrison and two still born sisters.

Funeral Mass was held Friday, December 7, 2018 at the Our Lady of Lourdes Catholic Church, Harrisonville, Missouri with burial in the Peculiar Cemetery, Peculiar, Missouri.

The family received friends Thursday, December 6, 2018 at the Dickey Funeral Home, Harrisonville with a Rosary at 6:00 p.m.

Family suggests memorial contributions may be made to Our Lady of Lourdes Catholic Church Memorial Fund.
To order memorial trees or send flowers to the family in memory of Charles "Chuck" F. Morrison Jr., please visit our flower store.