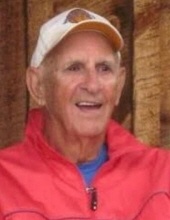 Chuck was born in Chicago, IL to Herman and Luella Thate on October 3,1930. He has two sisters, Carol and Lois, and is preceded in death by his brother, Bob. He married the love of his life, Betty Thate, on November 7, 1953. She preceded him in death on April 2, 2021. They were married for 67 years. They have 3 children, Drew (Ellen), Robin (Jerry) and Deni (Wayne). Chuck delighted in the fact that he had 8 grandchildren and 17 great grandchildren.

Chuck got his undergraduate degree from Southern Illinois University where he was a star center on the Salukis basketball team. He went on and received a doctorate degree at the University of Missouri Columbia. Chuck dedicated his life to education where he spent nearly 50 years as a professor and an administrator. Chuck was a champion of the civil rights movement. In 1985, he and Betty moved to Pensacola, FL where he taught in the education department at the University of West Florida. He was also an educational consultant for the Escambia County Public Schools.

Chuck and Betty spent their retirement years living peacefully and joyfully in a cabin tucked away in Paradise Valley Montana. They often enjoyed visits by family and friends.

To order memorial trees or send flowers to the family in memory of Charles "Chuck" Thate, please visit our flower store.