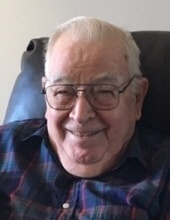 Charles Delmar Luther of Kansas City, Missouri was born May 21, 1929 in Austin, Missouri the son of Charles Baine and Josie Agnes (Cantrell) Luther. He departed this life on Saturday, June 15, 2019 at Benton House of Blue Springs, Blue Springs, Missouri surrounded by love and family at the age of 90 years and 25 days.

He was united in marriage to Norma Leone Morris on May 16, 1970 in Branson, Missouri.

Besides his parents, Charles was preceded in death by his wife, Norma.

Family suggests memorial contributions may be made to Preferred Hospice.
To order memorial trees or send flowers to the family in memory of Charles Delmar Luther, please visit our flower store.