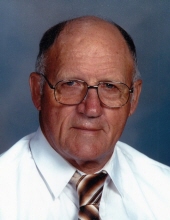 Charles Harvey Sprinkles, 88, of Pleasant Hill, Missouri, was born, July 11, 1930, in Washburn, Missouri, the son of Jake and Lucy Fay (Gallyon) Sprinkles. He departed this life, Thursday, January 3, 2019, at his home.

On January 4, 1949, he was united in marriage to Mildred Geraldine Beck in Cassville, Missouri. She preceded him in death in 2004.

Harvey and Mildred moved to Kansas City in 1953 where he was employed as a Foreman in the Kansas City Stockyards for over 36 years. They moved to Pleasant Hill in 1964. He was a member of the Big Creek Baptist Church, Pleasant Hill. He enjoyed hunting and fishing.

Funeral services were held Thursday, January 10, 2018, at the Stanley-Dickey Funeral Home, Pleasant Hill, Missouri. Reverend Jim Richards will officiate. Interment will be in the Strasburg Cemetery.

Visitation was held one hour prior to the service at the funeral home.

Memorial contributions are suggested to the Strasburg Cemetery and may be sent in care of the funeral home.