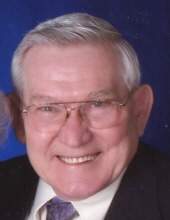 Charles Roger Elliott was born March 24,1937 to Harry Pierson and Louise (Hart) Elliott in Bogard, MO. He passed peacefully surrounded by his children and was received into the arms of the Lord on September 6, 2021 at the age of 84 years, 5 months and 13 days.

Charles had a lifelong love of fishing, western movies, clock making, model trains, tinkering with engines and motors and crossword puzzles.. He will be remembered for his sweet smile, strong work ethic and storytelling. He was the kind of man that made you want to pull up a chair and visit for a while.

Please join the family to remember and honor Charles at a Visitation/Celebration of Life on Saturday, October 23 from 1-3 p.m. at the Garden City Community Center, Garden City, MO.

Memorial Contributions can be made to Ascend Hospice, in care of Dickey Funeral Home P.O. Box 432, Harrisonville, MO 64701.
To order memorial trees or send flowers to the family in memory of Charles R. Elliott, please visit our flower store.