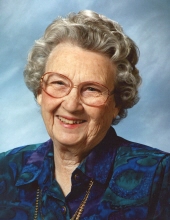 Clara Lucille Hoke of Harrisonville, Missouri was born April 22, 1926 in Independence, Missouri the daughter of Charles and Vica (Wait) Rogers. She departed this life on Tuesday, December 18, 2018 at her home at the age of 92 years, 7 months and 26 days.

On April 6, 1946 Clara was united in marriage to George Bowler Hoke in Olathe, Kansas.

Clara was a homemaker as well as owner and operator along with her husband, George, of Hoke Tow Company in Harrisonville for many years. Earlier she was an embroidery operator for Grace Company in Belton, Missouri. Clara was a member of the First Christian Church, Harrisonville. She loved to dance and listen to swing music, was a wonderful artist and loved to oil paint, but her greatest enjoyment was spending time with her grandchildren.

Besides her parents, she was preceded in death by her husband, George Hoke on March 9, 2007; 2 brothers, Frank and Clarence Rogers.

Funeral services were held Friday, December 21, 2018 at the Dickey Funeral Home, Harrisonville, Missouri with burial in the Pleasant Hill Cemetery.

Family suggests memorial contributions may be made to the Harrisonville Animal Shelter.
To order memorial trees or send flowers to the family in memory of Clara L. Hoke, please visit our flower store.