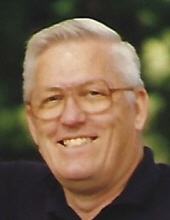 In 1993, after 38 years, Claude retired from the Union Pacific Railroad. He and Phyllis bought an RV and traveled about the country. They proudly declared themselves “snow birds” – working winters at Disney World, Florida and spending summers on the road. Together, they visited all 50 states and Washington DC. They drove to Canada and south through Mexico. Having conquered North America, they visited and drove through Europe – Germany, England, Italy, France and Switzerland.

Claude is preceded in death by his brother, James (Jim) Henry Barnes, and his grandson, Justin Carl Barnes.

A Celebration of Life Service was held Saturday, March 24, 2018 at the Dickey Funeral Home, Harrisonville, Missouri with inurnment in the Brown Cemetery near Oak Grove, Missouri following the service.

The family received friends Saturday, March 24, 2018 at the funeral home.
To order memorial trees or send flowers to the family in memory of Claude R. Barnes, please visit our flower store.