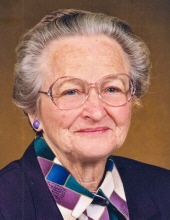 Cletis Dee Snyder, 91, of Pleasant Hill, was born, July 14, 1927, on a farm southeast of Latour, the daughter of John W. and Vangy (Shelten) Murphy. She departed this life, Wednesday, August 8, 2018, at the Foxwood Springs Rehabilitation Center in Raymore, Missouri.

Cletis was also preceded in death by one son, Larry Snyder on May 21, 2016; a grandson, Christopher Snyder; one brother, Jimmy Murphy; and one sister, Freda Shipley.

She is survived by three children, Billy (and Sherrie) Snyder, Dennis (and Melinda) Snyder, and Darlene (and Clifford) Eslick, all of Pleasant Hill; 9 grandchildren; 14 great grandchildren; one brother, Bill (and Bonnie) Murphy of Kingsville; two sisters, Stella Whiteman of Kingsville, and Mary McKay of Holden; and many other relatives and friends.

Cletis was a homemaker and enjoyed working alongside Bill on their family farm of 67 years. Prior to her marriage she had been employed as a waitress in Holden (where she first met Bill), and also at Sears & Roebuck in Kansas City. She enjoyed spending time with family, sewing, quilting, crocheting, painting and watching the Royals. She was an active member of the East Lynne Baptist Church.

Visitation was held Sunday, August 12, 2018, at the Stanley-Dickey Funeral Home.

Memorial contributions are suggested to the Staley-Mound Cemetery and may be sent in care of the funeral home.

Online condolences may be sent to the family at www.stanelydickeyfuneralhome.com