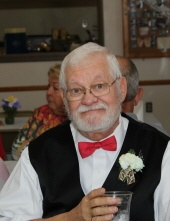 Clifford George Eldred of Odessa, MO was 80 years 14 days when he went to be with Jesus on April 17th, 2020. He passed peacefully at home surrounded by the love of his family.

He was born April 3rd, 1940 in Macks Creek, MO to Orie S. and Mildred L. (Eidson) Eldred. He spent his early years growing up in this area making lifelong friends and graduating in 1959 from Macks Creek High School. In August 1960 he joined the Marines performing his duty as a Military Policeman. He was honorably discharged in July 1964.

On April 8th, 1967 he married his best friend and the love of his life Paula Hays. Together they celebrated 53 years of marriage and had six children. He retired from General Motors Company in 1993. Jan 2002 they moved to Wheatland, MO and faithfully attended St. Bernadette Catholic Church in Hermitage, MO for many years. In 2017 they moved to Blue Springs, MO to be closer to family. In 2018 they settled permanently in Odessa, MO becoming parishioners at St. George Catholic Church.

During his lifetime he was active in Boy Scouts of America, an honorary warrior in the Tribe of Mic-O-Say, and participated as a member of The Knights of Columbus. He enjoyed reading, hunting and fishing.

He is preceded in death by his parents Orie and Mildred Eldred, his brother and sister in law Richard and MaryAnn Eldred, 2 grandchildren- George Pappas and Clara Eldred, one great grandchild Jared Jones and his faithful dog companion Timmy.

A private family graveside will be held at the Mt. Olivet Cemetery, Kansas City, Missouri.

Funeral arrangements are under the direction of the Dickey Funeral Home, Harrisonville, Missouri.
To order memorial trees or send flowers to the family in memory of Clifford G. Eldred, please visit our flower store.