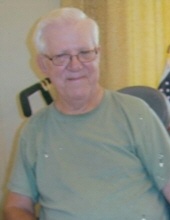 Cloyd Merlin Musick of Drexel, Missouri was born August 20, 1928 in Lisle, Missouri the son of Cloyd Olen and Gladys Lorene (Noland) Musick. He departed this life on Wednesday, October 24, 2018 at Golden Years Care Services in Harrisonville, Missouri at the age of 90 years, 2 months and 4 days.

On may 5, 1976 Merlin was united in marriage to Margaret Ruth (Bennett) Montgomery in Freeman, Missouri.

Merlin was a farmer and stockman and also was employed as a store keeper for Allied-Signal, Kansas City, Missouri until his retirement on December 31, 1990. He was an Air Force Veteran of the Korean War. A member of West Line Christian Church, West Line, Missouri; Grand River Lodge #276, Freeman, Missouri; Bayard Chapter #179, Order of the Eastern Star, Harrisonville, Missouri; V.F.W. Post #4347, Drexel, Missouri; American Legion Post #250, Louisburg, Kansas and the International Association of Machinists #314, Kansas City, Missouri. Merlin was a lifelong area resident. He never knew a stranger and was a great uncle to all of his nieces and nephews.

Besides his parents, Merlin was preceded in death by his brother, Marvin.

He is survived by his brother, Myron E. Musick and wife, Louise, Drexel, Missouri; his sister-in-law, Sue Musick, Harrisonville, Missouri; other relatives and a host of friends.

Masonic service was held Saturday, October 27, 2018 at 2:00 p.m. at the Dickey Funeral Home, Harrisonville, Missouri with funeral services to follow. Burial is in the Glenwild Cemetery, Cleveland, Missouri.

The family received friends Saturday, October 27, 2018 at the funeral home.

Family suggests memorial contributions may be made to the West Line Christian Church Memorial Fund.
To order memorial trees or send flowers to the family in memory of Cloyd Merlin Musick, please visit our flower store.