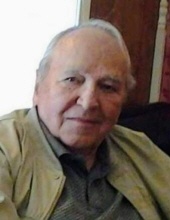 Leroy, nicknamed Shorty, was born September 1, 1926, in Garden City, Missouri the son of Lorenzo Dow and Edith Mae (Weaver) Vansandt. He grew up on the family farm in Cass County, graduated from high school in Archie, Missouri and attended one year of college in Columbia, Missouri before enlisting in the Army Air Corps during World War II. Leroy was united in marriage to his high school sweetheart, Shirley McLaughlin on November 30, 1946, in Argentine, Kansas. He worked at the General Motors assembly plant for 30 years before retiring. He believed in working hard so in his retirement years he raised cattle and owned rental properties which kept him active until he was over 90 years of age. Leroy and Shirley traveled often to visit friends and relatives all over the country and made many trips to Las Vegas to enjoy their favorite entertainers such as Andy Williams and Frank Sinatra. They made lasting memories.

Rest in peace Papa Shorty. As you said to Shirley when she passed, “We’ll see you again.”

Cremation. A Celebration of Life Service will be 2:00 p.m., Saturday, June 11, 2022 at the Dickey Funeral Home, Harrisonville, Missouri. Inurnment will follow the service at the Crescent Hill Cemetery near Adrian, Missouri with Military Honors.

Family suggests memorial contributions may be made to the American Red Cross.

To order memorial trees or send flowers to the family in memory of D. Leroy "Shorty" Vansandt, please visit our flower store.