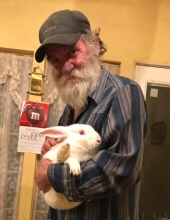 Danny Earl Wagner, of Garden City, Missouri was born May 13, 1961 in Clinton, Missouri the son of Harry William and Vadene (Cantrell) Wagner. He departed this life on Monday, April 16, 2018 at the Cass Regional Medical Center, Harrisonville at the age of 56 years, 11 months and 3 days.

On September 17, 1992, Danny was united in marriage to Mary Thomas (Kildow) in Lowry City, Missouri.

Danny was employed as a self laborer doing various jobs and was a jack of all trades. He attended the Bethel Assembly of God Church, Garden City where he was baptized and enjoyed the men's bible study. Danny enjoyed hunting, fishing, working on cars and mowing people's yards.

Besides his parents, he was preceded in death by his wife, Mary Wagner on August 8, 2008.

Cremation. A Celebration of Life Service will be held at 6:00 p.m., Saturday, April 28, 2018 at the Bethel Assembly of God, Garden City, Missouri.


Family suggests memorial contributions may be made to the Danny Wagner Memorial Fund. Please make checks payable to Marie Wagner.

Funeral arrangements are under the direction of the Dickey Funeral Home, Garden City, Missouri.
To order memorial trees or send flowers to the family in memory of Danny Earl Wagner, please visit our flower store.