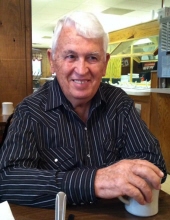 Darrell William Davis, age 89, passed away at 12:45 am on Sunday, December 8, 2019 after a
long battle with cancer. He was with his wife of 65 years at their home in Belton, MO. Darrell
was born near Lamoni, IA before his family moved to Falcon, MO, where he attended a
one-room schoolhouse. After his mother died, he was raised mostly by relatives in Lebanon,
MO while his father’s work required him to travel. Darrell’s father died shortly after his
graduation from Lebanon High School in 1948. Darrell attended Draughan Business College in Springfield, MO and was hired at the Missouri Department of Transportation before being
drafted into the USMC during the Korean War. Upon separation from the USMC, Darrell
returned to his job at MODot and moved into a boarding house in KCMO, where he met another resident, Dolores Ann Prettyman. They fell in love and were married on January 23, 1954. Darrell and Dolores were blessed with 4 children, 11 grandchildren and 4 great-grandchildren. He has been a Member and Deacon of Ruskin Heights Baptist, Swope Park Baptist, Red Bridge Baptist, and Pleasant Ridge Baptist Churches, where he was also Church Treasurer and a member of the choirs. Darrell worked as an Auditor and Credit Union Treasurer at MODot for 43 years until his retirement in October of 1992. Darrell and Dolores and their children lived in the KCMO area until moving to Harrisonville, MO, where they lived for more than 40 years. Among Darrell’s hobbies were coin and stamp collecting, raising animals, and gardening.

Darrell was preceded in death by his parents, John and Eliza Davis, daughter Dixie Vanessa
McHenry, and sons-in-law Vern Byers and Jimmy Foy.

Funeral services were held Saturday, December 14, 2019 at the Dickey Funeral Home, Harrisonville, Missouri with burial in the Pleasant Ridge Cemetery near Harrisonville.

The family received friends Friday, December 13, 2019 at the funeral home.

Family suggests memorial contributions may be made to the City Union Mission, Pleasant Ridge Cemetery Association or the Jimmy Foy Scholarship Fund and may be left at the funeral home or mailed to Dickey Funeral Home, P.O. Box 432, Harrisonville, MO 64701.
To order memorial trees or send flowers to the family in memory of Darrell William Davis, please visit our flower store.