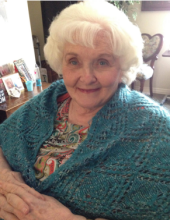 Davie B. Anderson of Harrisonville, Missouri was born on July 20, 1929 in Tiptonville, Tennessee the daughter of David Burdine and Mary Olivia Burnett. She departed this life on Sunday, August 30, 2020 at Crown Care Center, Harrisonville, Missouri. Throughout her life and until the end, she shared her love and time with her family and many friends.

Davie was united in marriage to Jimmie Lee Anderson, her King Arthur and Sir Lancelot all rolled up as one, on July 19, 1951 in Tiptonville, Tennessee. They were blessed with their first daughter, LeeAnn Anderson on December 25, 1957 and with their second daughter, Lynne Olivia Anderson on September 18, 1959. Her daughters and their families were always the source of her greatest pride and joy.

Davie met her future husband while both were attending college in Columbia, Missouri, she at Stephens College and he at the University of Missouri. Upon their graduations and marriage, they moved to Norfolk, Virginia where Jim began his military service at the naval base there. In 1953, they returned to the Kansas City area where Davie was a 4th grade teacher and art teacher while Jim attended the University of Missouri at Kansas City School of Dentistry. They moved to Harrisonville in 1957 when Jim began practicing dentistry at his father’s practice. Davie became a fulltime mother and homemaker that year with a house often filled with the children in the neighborhood. She was a dedicated Girl Scout leader during the late 1960’s and early 70’s and used her artistic ability and fun-loving nature to teach and inspire her scouts. In 1964, she was chosen to represent her state as Mrs. Missouri while her family and hometown looked on with pride. Davie found much joy as a P.E.O. sister in her local chapter, Chapter GR and as a decades-long member of the Delvers Federated Club. She also worked tirelessly in supporting Jim’s dental practice and held many positions in the Missouri Dental Wives Auxiliary for almost 30 years. She practiced her faith since 1957 at the Harrisonville Methodist Church and could often be heard thanking her Lord for the many blessings He had bestowed on her.

As much as Davie enjoyed all the aforementioned endeavors, she found her primary happiness sharing her love, time, and gifts with her four grandchildren. They spent many a day and night with their “TuTu” and never seemed to get enough. She could have written an instruction manual on how to be the best grandparent ever!

Davie was preceded in death by her husband Jim on July 8, 1981 and by both of her parents and her older sister, Dr. Tannye Rawls.

All of us who have loved her and been loved by her pray her light shines through us in order to bless others as she blessed us. We love you TuTu and will never be the same without you

Funeral services were held Wednesday, September 2, 2020 at the Dickey Funeral Home, Harrisonville, Missouri with burial in the Orient Cemetery, Harrisonville.

Due to the ongoing Pandemic the family suggest that masks be worn and social distancing to be observed while in the funeral home.

Family suggests memorial contributions may be made to the American Cancer Society.
To order memorial trees or send flowers to the family in memory of Davie B. Anderson, please visit our flower store.