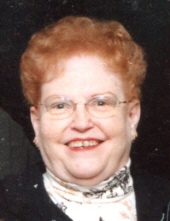 Deanna Jean Spears, 78, Harrisonville, Missouri was born July 4, 1939 in Kaw, Missouri the daughter of William P and Rose (Ballue) McCannon. She departed this life on Thursday, May 16, 2018 at the Crown Care Center, Harrisonville at the age of 78 years, 10 months and 12 days.

On November 7, 1959, Deanna was united in marriage to Arthur Emery Spears.

Deanna loved being a homemaker and taking care of her family. She was a member of the Fraternal Order of Eagles #385, Independence, Missouri and enjoyed playing bingo at Crown Care.

Besides her parents, she was preceded in death by her husband, Arthur Spears on March 25, 2013; a brother, Jerry McCannon and a sister, Virginia Pressley.

She is survived by a daughter, Teresa Cates and husband Autry, Garden City, Missouri; 4 grandchildren; several nieces and nephews; other relatives and friends.

A Celebration of Life service will be held at a later date.

Funeral arrangements are under the direction of the Dickey Funeral Home, Garden City, Missouri.
To order memorial trees or send flowers to the family in memory of Deanna Jean Spears, please visit our flower store.