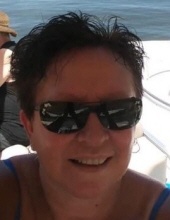 She was preceded in death by her father, Richard Elliott; mother, Loretta Elliott, and infant granddaughter, Cassidy Grimsley.

On August 29, 1980, Debbi was united in marriage to Kelly LeRay Joiner at the First Baptist Church, Lee's Summit, Missouri.

Debbi was known to all as a devoted and loving wife, mom and nana who enjoyed spending her free time at the lake with “her people”, who were both family and friends who became family. The highlight of her life was spending quality time and creating special memories with her grandbabies. Debbi worked for Palmer Electric as a Project Coordinator for the last nine years. In the words of Debbi, until we meet her again, it’s not goodbye, but “Toodles”.

The family received friends Saturday, August 1, 2020 at the funeral home.

The family strongly requests no flowers. Donations may be sent to Golden Valley Memorial Hospice of Clinton, MO https://www.gvmh.org/about/foundation/ in honor of Debbi.
To order memorial trees or send flowers to the family in memory of Debra "Debbi" Lynn Joiner, please visit our flower store.