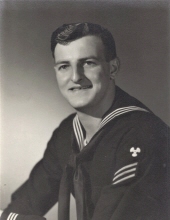 Donald Max Chulufas, of Harrisonville, Missouri was born August 21, 1929 in Ottawa, Kansas the son of Gus Angelus and Lula Jane (Morris) Chulufas. He departed this life on Saturday, April 27, 2019 at the Butler Center for Rehabilitation and Nursing, Butler, Missouri at the age of 89 years, 8 months and 6 days.

On December 28, 1974, Donald was united in marriage to Barbara Louise Lang in Clinton, Missouri.

Donald was employed as a truck driver. He was a proud Navy veteran serving in the Korean War aboard the USS Gyatt and was a time when he learned to play the steel guitar. Donald always loved to tell the story when he played with Jimmy Dean. He loved to bowl and was proud of his 300 game ring that he got on the same night as his son-in-law, Michael Greer. Donald enjoyed painting and restoring cars, especially Chevelle’s, had a pilots licensed and was proud of his airplane and loved to grow a vegetable garden.

Besides his parents, he was preceded in death by 4 sisters, Eulia, Dorothy, Catherine and Jean; 3 brothers, Luther (Tex) Singleton, James and Robert.


Cremation. A Celebration of Life Service will be held at a later date.

Funeral arrangements are under the direction of the Dickey Funeral Home, Harrisonville, Missouri.
To order memorial trees or send flowers to the family in memory of Donald Max Chulufas, please visit our flower store.