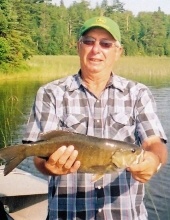 Donald William Gray, 77, of Pleasant Hill, was born, June 20, 1941, in the Wingate community near Pleasant Hill, the son of Homer O. and Rose E. (Collings) Gray. He departed this life, Monday, December 24, 2018, at the Research Medical Center, in Kansas City.

Don was a 1959 Pleasant Hill High School graduate. He was a United States Army veteran.

On May 1, 1965, he was united in marriage to Linda Lucille Wingate in Metz, Missouri.

Don was employed as a Machinist for Western Electric retiring in 1991. He also owned and operated his farm near Wingate. He had been active with the 4-H and the FFA. He enjoyed hunting, fishing, working on tractors as well as working out on his farm, and he was an avid reader.

Don was preceded in death by his parents.

He is survived by his wife Linda of the home; three children, Melissa Sebree of Blue Springs, Missouri, Danny (and Tracy) Gray and Josh (and Erica) Gray, both of Pleasant Hill; one brother, Ralph Gray of Jackson, Tennessee; one sister Kathy (and Elgin) Brandes of Pleasant Hill; 5 grandchildren, Amanda (and Jay) English, Zach (and Mickaela Moore) Sebree, Matthew Gray, Chase Gray, and Hunter Gray; one great grandson, Owen English; other relatives and a host of many friends.

Memorial contributions are suggested to the Lay Clergy Food Pantry and may be sent in care of the funeral home.