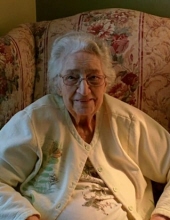 Donna was born on November 27, 1925 in Magnolia, IL to Tony Gallo and Beryl Roberts Gallo. Donna graduated from Sullivan High School in Chicago, IL in June of 1943. She married Roney Lee Stroud Jr on March 31, 1947 in Terre Haute, IN. Donna had four sons Roney Stroud III, Rolando “Lee” Stroud, Russell Stroud, and Richard Stroud. She spent her days cooking, sewing, crocheting, crafting, reading, or volunteering. She volunteered to make ornaments with the patients and decorate all the trees at the Shriner’s Hospital in Atlanta in the 70’s. She loved being a cost accountant and later retired but still maintained ledgers. Donna babysat for more than three decades in the various states she lived. She is known today to many as “Grandma Donna”.

Donna was preceded in death by her husband, Roney Stroud Jr, her sons Richard, Russell, and Roney Stroud III, and her great grandson Kaimen Valverde.

Special thanks to the staff at Crown Care in Harrisonville for caring so deeply for Donna.