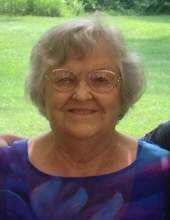 Donna grew up on a dairy farm near La Cygne, Kansas. She learned hard work, dedication, and respect from parents George and Edna Arzberger, who preceded her in death. She was an active member of the La Cygne First Christian Church, where she shared her beautiful voice in the choir for many years. She attended La Cygne High School, where she played trombone for the band, was a soloist in the Chorus, and was a member of the cheerleading team. She graduated from La Cygne High in 1951.

After graduation, Donna moved to Kansas City, where she began working for Farmers Insurance Group.

In October of 1953, Donna married Luther Brewer of Drexel, Missouri. She continued to work at Farmers Insurance until the birth of her oldest daughter, Diana, in September of 1954. The family moved to La Cygne for two years, where Donna was a homemaker.

Shortly after, Donna and Luther moved to Drexel, Missouri, they built Brewer's Conoco Service Station and Brewer's Drive-In. Donna managed the Drive-In restaurant for nearly 10 years. During this time, her second daughter, Brenda, was born in July of 1960.

Donna loved her family. When Diana and Brenda were young, she took them everywhere. This included traveling cross-country with a race-car in tow: Donna, along with then-husband, Luther Brewer, participated in sprint car and super modified racing for over 15 years.

She attended every basketball game that Diana and Brenda played in through junior and high school – with the girls being 6 years apart, a lot of games! When Brenda's son Jake played basketball and tennis, Donna was always in attendance.

She raised her family, while running a business and home, in Drexel until 1978. Donna then moved to Overland Park, Kansas, where she went back to work for Farmers Insurance Group. In 1991, Donna retired to care for her new grandson, Jake. During Donna's time at Farmers, she purchased a home in Garden City, Missouri, where she remained until 2007. At that time, she moved to Harrisonville, where she spent her final years.

Donna loved singing and playing the piano. In Drexel, she became the “go-to” person to ask if someone needed a singer for a wedding or funeral. She joined the Sweet Adeline's Chorus and performed with them for several years.

Donna had many hobbies. She was an avid gardener. Her delicious tomatoes and garden bounty will be missed by many. Donna was an excellent cook, her family always looked forward to her meals, especially her pies! She loved sewing, making clothes for her daughters when they were young. She painted ceramics for many years. Later, she took up quilting, leaving many beautiful works of art for her family. She was a collector, especially, of all things Christmas. She most looked forward to the Fourth of July, when she could have her children, grandchildren, and great-grandchildren together.

She touched many lives in her 85 years, and will be remembered for her sweet smile and generous spirit.

Donna’s Family would like to express their sincere love and appreciation to the Staff at Golden Years for the care and love they provided to Donna and her family.

Mark 5:34
He said to her, “Daughter, your faith has healed you. Go in peace, and be freed from your suffering.”

Cremation. A Celebration of Life Gathering was held Saturday, May 4, 2019 at the Dickey Funeral Home, Harrisonville, Missouri.

Family suggests memorial contributions may be made to Crossroads Hospice.
To order memorial trees or send flowers to the family in memory of Donna Faye Brewer, please visit our flower store.