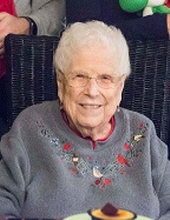 June was a devoted Mother and homemaker her entire life.

June and Everett moved to Pleasant Hill in June, 1982 and made their home together until Everett's death in 1998.

Following the death of Everett, June moved to John Knox Village until she moved to Hopkins, Minnesota in 2016 to be near her oldest daughter. She lived happily at The Glenn in Hopkins until her recent death.

Besides her parents and her husband, Everett, she was preceded in death by her eldest child, David, two brothers, Ivon Poole and Mervin Poole and two sisters, Viola Hamilton and Millie Palmer.

June and her sister Millie were the best of friends and loved travelling, going on cruises and enjoying lots of friend.

Private Family Service will be held at Dickey Funeral Home with burial in Dayton Cemetery near Garden City, Missouri.

June (Mom) is in her forever home - Heaven.
To order memorial trees or send flowers to the family in memory of Doris "June" Shubert, please visit our flower store.