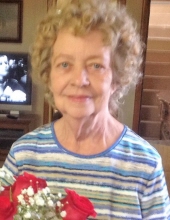 Dorothy Jane Vaughn, 73, of Pleasant Hill, was born, October 11, 1944, in Kansas City, the daughter of Auda and Stella (McCalpin) Slagle. She departed this life, Monday, September 24, 2018, at the Lee’s Summit Medical Center Surrounded with love and family.

On August 28, 1960, she was united in marriage to Richard Danny Vaughn in Greenwood.

Dorothy was a homemaker and wonderful wife, mother, and grandmother. She enjoyed sewing, crocheting, quilting, crafting and cooking. She also enjoyed working on her I Pad.

Dorothy was preceded in death by one brother Bobby Slagle, and two sisters, Joyce Hitchcock and Anne Frieben.

Visitation was held Thursday, September 27, 2018, at the Stanley-Dickey Funeral Home.