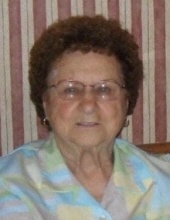 Dorothy L. Smith was born in Clinton, Missouri to parents Orville and Clara Kelley Box on July 4, 1927. She passed this life on June 12, 2020 at Crown Care Center in Harrisonville, Missouri.

In her 92 years, Dorothy had a rich and full life. She grew up with her parents and sister in Calhoun, Missouri. She attended Calhoun High School, graduating in 1945.

Mutual friends introduced her to Bobby Lee Smith and they were married on November 7, 1953 in Calhoun, Missouri.

Bobby and Dorothy were blessed with 59 years of marriage and the birth of three children: Gary Lee; Donna Jo; Danny Ray.

The Smiths raised their family in Urich. Dorothy worked at Western Electric in Lee’s Summit, Missouri, for 22 years, retiring in 1983.

Dorothy was a doting grandmother and enjoyed any time spent with her family.

She was a member of the Urich Baptist Church.

She was preceded in death by her parents; sister, Marjorie; an infant son; and in 2012, her husband, Bobby; and son, Danny.

Dorothy will be remembered for her ready, radiant smile; her twinkling eyes; her laughter; and as a loving wife, the best mother, and amazing grandmother.

Funeral services were held Wednesday, June 17, 2020 at the Dickey Funeral Home, Garden City, Missouri with cremation to follow the service.

Family suggests memorial contributions be made to Clinton Animal Shelter, Clinton MO.
To order memorial trees or send flowers to the family in memory of Dorothy L. Smith, please visit our flower store.