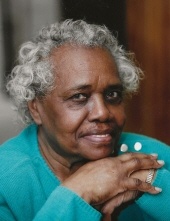 Dorothy Woods was born in Wesson, Mississippi on February 26, 1926.She was the youngest of 14 children born to Albert and Ada (Knight) Woods.

During her young life, she moved to Chicago, Illinois.On July 10, 1952, Dorothy was united in marriage to Theophlis Kanion, Sr.Together, they raised four children (three daughters and one son) in the City of Chicago.They lived on the South Side until 1993, then moved to Peculiar, Missouri, when they gave up their “city life” to live a more peaceful life raising beef cows and gardening.While living in Missouri, Dorothy pursued her love for helping people learn more about natural living by opening “Nature’s Open Door”, an herbal health food store.She and Theophlis remained married 49 years until he fell asleep in Jesus on December 26, 2001.Dorothy stayed in Peculiar for a few years but moved back to Chicago and lived with her daughter, Brenda McCray, for 7 years.She moved back to Missouri and Kansas for a short period before returning to Chicago again in 2016.

Dorothy had several jobs throughout her adult life, but her most noted one was as an employee for 18 years at Johnson Publishing Company in Chicago.After leaving Johnson Publishing, she would spend time as a homemaker and have various part-time jobs.

Graveside services will be held Monday, September 28, 2020 at 11:00 a.m. at the Orient Cemetery, Harrisonville, Missouri.
To order memorial trees or send flowers to the family in memory of Dorothy (Woods) Kanion, please visit our flower store.