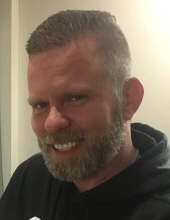 Douglas Allen Gilmore, of Harrisonville, Missouri was born August 7, 1976 in Harrisonville the son of Lyle and Helen (Cornelius) Gilmore. He departed this life on Monday, November 2, 2020 at his home in Harrisonville at the age of 44 years, 2 months and 26 days.

On October 1, 2011, Doug was united in marriage to Ashley Dawn Lawson in Harrisonville.

Doug loved skate boarding, camping, fishing, doing home projects and was a perfectionist. He was a family man, his love for his family was fierce and was always putting his family first.

Besides his father, he was preceded in death by two wives, Breeona Gilmore and Christy Pyle-Gilmore and a sister, Lynn Bray.

Cremation. A Celebration of Life Service will be 7:00 p.m., Friday, November 6, 2020 at the Dickey Funeral Home, Harrisonville, Missouri.

Family suggests memorial contributions may be made to the Children's Fund in care of the funeral home. Please make checks payable to Ashley Gilmore.
To order memorial trees or send flowers to the family in memory of Douglas Allen Gilmore, please visit our flower store.